In Matthew 25:14-30, Jesus tells a parable about a man who embarks on a journey. But before he leaves, he entrusts his possessions with three slaves that stay behind. Many readers may be unaware… but there a problematic translational switch-a-roo that happens in Matthew 25:15. It concerns the possessions the man entrusts to the slaves… the talents.

“To one he gave five talents, to another, two, and to another, one, each according to his own ability; and he went on his journey.” – NASB (’95 update)

How does that play out in this passage? There is a Greek word “talanton” that’s an ancient Greek unit of weight and, at the same time, a measure of monetary value. It’s kinda like the British “pound”. On one hand, a unit of weight, but also has a specific monetary value in that society.

The Greek word “talanton” means a large amount of money. Something of great value. Often times, the translators of English Bibles have decided to not translate this Greek word, but just pass the sound of the word through. So “talanton” appears in several translations as “talent” or “talents”.

It’s unfortunate that this transliteration sounds just like our English word “talent” that has an entirely different meaning. This has led to some great confusion.

This parable is not talking about spiritual gifts… or personal abilities. How do we know this? Well there is a statement made at the end of the parable that gives us a clue.

“For to everyone who has, more shall be given, and he will have an abundance; but from the one who does not have, even what he does have shall be taken away. Matthew 25:29

We’ve heard this language before… earlier in Matthew. In Matthew 13:10-12 when Jesus answers the disciples with the same language as this parable.

Jesus answered them, “To you it has been granted to know the mysteries of the kingdom of heaven, but to them it has not been granted. “For whoever has, to him more shall be given, and he will have an abundance; but whoever does not have, even what he has shall be taken away from him.  Matthew 13:10-12

The thing of great value (the “talanton”) being handed out is knowledge of how things work in the heavenly realm. When people bury the “mysteries of the kingdom of heaven” in the ground and don’t let them naturally reproduce… that knowledge is what is taken away.

So the real question is… what are you doing with the knowledge of heaven that you’ve been given? Are you investing it in the world and letting it naturally reproduce in others… or have you buried it somewhere unproductive? That is the real focus of the parable in Matthew 25:14-30.

This is just one of the topics I cover in The Matthew Study video lesson for chapter 25. You can watch the video below… or preview the other videos (and download chapter lessons) from The Matthew Study by visiting: THE MATTHEW STUDY VIDEOS page.

Also… be sure to listen and subscribe to the Rethinking Scripture Podcast! 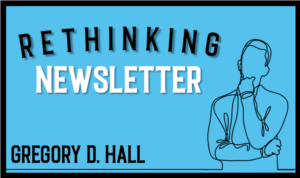